Succeeding with breastfeeding: 5 things you need to know

80% of women start out breastfeeding, with many ending, wishing they could keep going. Here are five things new moms need to know to help them along.

One of the greatest gifts you can give your newborn is making the decision to breastfeed. Not only is your milk filled with a near perfect mix of vitamins, protein, and fat — everything your baby needs to grow — but the mere act of breastfeeding is one that is difficult to replace. That skin to skin touch and eye contact play an important part in helping the baby bond with you and feel safe and secure.

In fact, research shows that early skin-to-skin contact and suckling may have physical and emotional benefits. Another study found that breastfed infants are less likely to become overweight children and teens. The study conducted by the Harvard Medical School speculated that breastfeeding could protect against later obesity by providing infants more control over when and how much they consume. Essentially, when a breastfed baby is full, he or she stops eating instead of when a bottle is empty, which could shape future eating behavior.

The benefits don’t just stop with the baby, either. Mothers benefit as well from the bonding that comes from breastfeeding. According to research, breastfeeding has been reported to have a positive impact mood and stress in mothers. Breastfeeding mothers have reported reductions in anxiety, negative mood, and stress when compared to formula-feeding mothers.

Breastfeeding mothers have also shown to have less instances of obesity, whereas those who are obese are less inclined to breastfeed and/or do so for very long.

Even so, breastfeeding does not come easily for many mothers.

If you are one of the many who want so badly to breastfeed, and are struggling to keep it up, here are some things you need to know so you (and your baby) can succeed at this most natural, wonderful and healthful endeavor.

1. Know that you are not alone in your struggle

Perhaps your baby was born prematurely, and you were unable to feed him in those first days, weeks or even months. Maybe your baby is by nature, not a very good eater, and shows disinterest in the beginning stages. New mothers may struggle with the shape of their nipples because they haven’t quite formed to that perfect eating-ready shape. Then, there is the inadequacy that plagues many mothers, resulting in fear and anxiety about breastfeeding among other things.

If you are a mother who finds breastfeeding to be overwhelming, take comfort that you are not alone. It’s OK and completely normal to struggle.

Most hospitals should have lactation specialists and even classes that you can take. This is a great tool to use, and don’t be embarrassed to do so.

However, there is a lot of information to take in during an overwhelming time, and you may leave still feeling unsure. This is why it is is so important to ask other mothers for help and advice. Maybe even watch a close friend or family member to see how she does it. Information is power, and the more you know, the more confident you will be in your own efforts.

3. Patience and diligence are key

These two may be opposites, but being both patient and diligent are key in a successful breastfeeding experience. Be patient knowing that the time will come when you and your baby figure

this out, but don’t give up. Before you know it, the hard days will be behind you, and you and your baby will be reaping the benefits of a well fought battle.

4. Don’t forget to feed yourself

Mothers by nature, often think of themselves before others. Due to this, you might find that you are so consumed with making sure your baby eats that you forget to feed yourself. In doing so, you are not allowing your body the calories and fluids it needs to produce enough milk for your baby.

According to the Mayo Clinic, breastfeeding mothers need an additional 330 to 400 calories a day. The clinic recommends getting those calories from nutrient-rich foods like whole-grain bread with a tablespoon of peanut butter, a medium banana or apple, and 8 ounces of yogurt.

Being a new mother is hard, and don’t let anyone tell you otherwise. There are so many questions, and you may find yourself stressed and overwhelmed. This is all natural. Even so, if you are stressed while trying to feed your baby, there is a good chance that stress will transfer to him, and he may have a more difficult time latching on, or doing so for very long.

Research published by the Women’s Center for Health found that some forms of psychological distress may have a negative impact on the immune properties of the breast milk. The article also cited research from Arizona State University that found mothers with higher stress levels released a higher level of cortisol into their milk. The babies who consumed milk with high cortisol levels were found to cry more easily or become agitated when placed in unfamiliar situations. So, essentially your stress could be translating to your baby through your milk.

And while we don’t want to add to your stress level by giving you yet more information to fret about, we do want you to take some time to relax. Go for a walk, read a book or listen to some soothing music before breastfeeding your baby. And when you’re sitting down with your little guy and gazing into each other’s eyes, take a breath and enjoy the moment.

Things will be OK eventually. They really will. 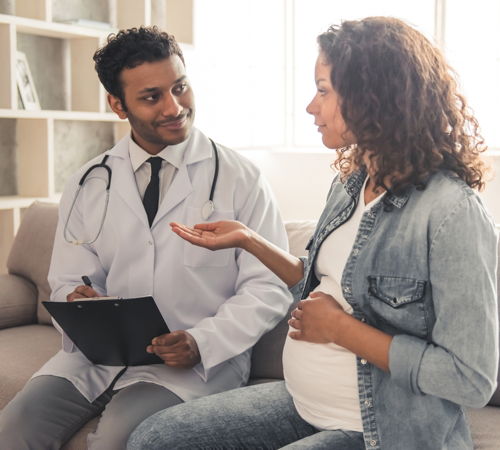 5 questions you should ask your OB

From the day you learn you're expecting, you're filled with questions. While all are worthy of being asked, here are 5 you really should ask your OB.